Open meetings were held to receive input and guidance on the placemaking process.

Artists from or with a connection to Treaty 7 contributed to this initiative. Library staff and members of the Indigenous Place Making Council of Canada visited the Stoney Nation, Siksika Nation, Tsuu’tina Nation, Métis Nation of Alberta, and Aboriginal Friendship Centre of Calgary.

The six Indigenous artists — all from or with a connection to Treaty 7 — contributed art to three spaces within Central Library.

Watch the documentary to learn more about the importance of Indigenous placemaking as well as the artists' their work that is permanently installed at the Library.

Roland Rollinmud's painting Survival Harvesting depicts a history of First Nations in Canada, particularly the Stoney Nation, truly as the stewards of the Land. By portraying the traditional hunting methods, berry harvesting, and traditional ceremonies practiced by the Bearspaw, Chiniki and Wesley Nations, this work illustrates methods of self-sufficiency still used to this day. The imagery within the mural exemplifies the resourcefulness to take care of oneself and one's family.

Rollinmud depicts the 200-year gap between First Contact and the present day, by not only showing how things have changed, but also how life was much simpler when camps shared space with members of diverse tribes and nations. This knowledge has been passed down to Rollinmud from growing up in community with his parents, extended family members, and ancestors.

The concept behind the collaborative mural for Central Library has a big emphasis on the past, present, and future of the traditional pride within the tribes of Treaty 7. This includes the Blackfoot Confederacy, Tsuut’ina, Stoney Nakoda, and Métis Nation Region 3. The triptych shows a progression of the (Past) from when tribal traditions were an essential part of life and dictated how the land was respected, the animals, as well as each other.

Starlight's (Present) portion shows how reclaiming Indigenous traditions and passing them along to the children brings us to the (Future) portion, which depicts how fully reclaiming traditional ways that men, women, and children can all practice and share with each other renews health back to the people. Sharing the Knowledge shows how important culture is to each tribe both as individuals and as a collective group through living, sharing, and respecting one another.

Spiritual Changes Through Indigenous Teachings features many themes and images that are ubiquitous throughout modern times. The painting's central theme is the modern exchange of Indigenous knowledge as we all move towards the future. It shows images of storytelling, a father teaching his son to be a Chicken Dancer, wild horses showing that the Blood Tribe (Kainai) are horse people, Chief Mountain, and the image of Chief Crowfoot. Teke Dan's hope is that this painting will give the people of Calgary and the visitors of it, an idea of the overall beauty that Indigenous cultures and the land of the Blood Tribe hold.

Education is the New Buffalo

Historically the key to survival was the success of hunting wildlife and in contrast, the most important reliance to survival today is education. Peyachew utilizes the tools of education in letters and numbers by constructing an icon that symbolizes the legacy of survival from the past to the present. He chose to honour the buffalo as the universal symbol for all Indigenous people as a legacy for survival for all cultures. The North American Bison, who like the Indigenous cultures was on the brink of extinction and like the Indigenous people, has recently began to grow in numbers.

The concept to use language text from local Indigenous groups to fabricate the icon has reinstated that education is key to sustaining a healthy living environment. Engaging the public to search for Indigenous words can relate to problem solving, word search, research, perception, and creativity, tasks that are most often associated to developing the mind in an education environment. 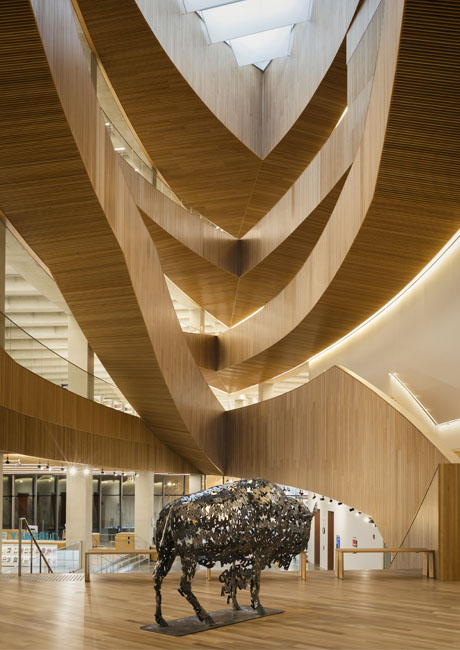 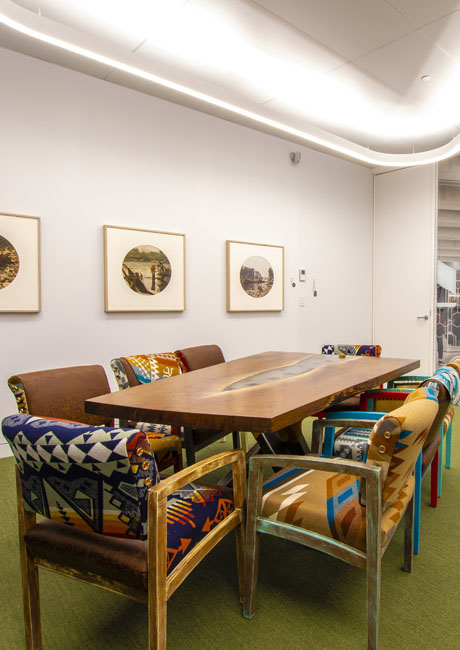 A new collection of furnishings created by Glenna Cardinal that holds First Nation influence with designs and cultural inspirations. Through this new commission she explores her bone deep connection to the reserve land that she grew up on, the land which was her Tsuut’ina Nation grandmothers’, now the Southwest Ring Road, and this is her response to her displacement. She is looking to reclaim herself in how she reuses and reimagines her materials.

Cardinal has drawn inspiration from this struggle and poured her sense of home into the details of her work. She is creating and seeking comfort in home furnishings and finding beauty in a new place. Cardinal is a Saddle Lake Cree Nation member that continues to reside on her mother’s reserve, the Tsuut’ina Nation. Once a safe place, it is now a land wiped clean of their existence, returned to the same people that put First Nations on reserves.

Aiitskaitsiiwa | She Is Reminiscing is a new body of work by Bear Hat that presents a conversation between images of the Treaty 7 landscape and her own stories growing up in this land. Learning new and particular skills is a focal point of growing up; Bear Hat’s father often taught her such skills, developing her knowledge and teaching her why this land is so important. What was often cast as summer fun always turned out to be integral lessons about the land.

Aiitskaitsiiwa | She Is Reminiscing includes images taken by Bear Hat, of places in and around Calgary that serve as significant backdrops of important moments throughout her life: where she learned how to safely swim in the Bow River, replete with strong currents, and how a rock or a washed over branch can be souvenir to their time spent together. There is simple beauty that comes from the landscape; these stories speak to such beauty. They should be heard. 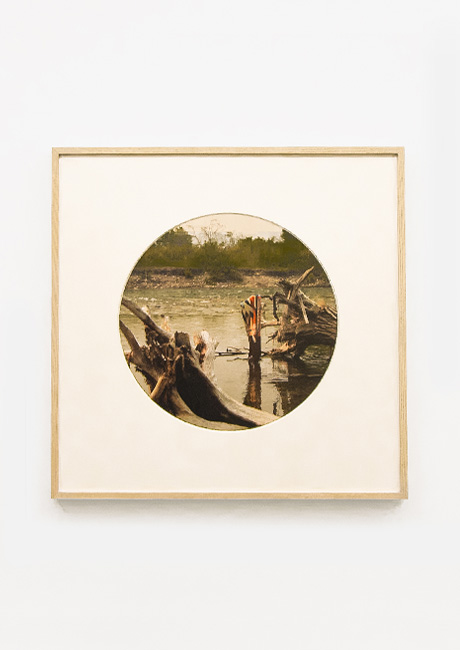