All Library locations will be closed on July 1, except Central Library, which will be open from 11 am – 5 pm for Canada Day activities.
Menu

Watch the documentary to learn more about the importance of Indigenous placemaking as well as the artists' and their work that is permanently installed at the Library. 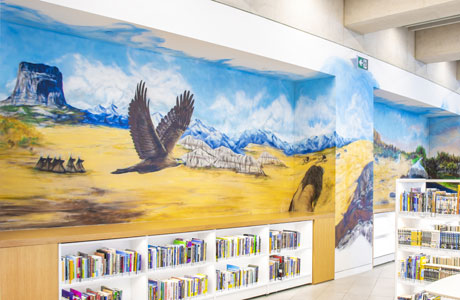 Just as the Teen Centre is a space for collaboration between growing minds, so too is this mural, which brought together three emerging artists to complete it through the Urban Society for Aboriginal Youth (USAY).

This augmented reality wall expands beyond the borders of existing space in more than one way. A traditional landscape bridges the gap between the panels, symbolic of the limitless potential of nature. Community leaders and Elders were consulted to determine the images that would represent their communities within this shared Treaty 7 landscape.

People can also experience this piece in the digital realm by using the USAY AR app to scan the mural with their mobile device. Learn about the rivers, mountains, animals and other features of the mural, as well as hear a land acknowledgement gifted by Elder Randy Bottle. This interactive landscape speaks to people, just as this land has been teaching Indigenous peoples for thousands of years. 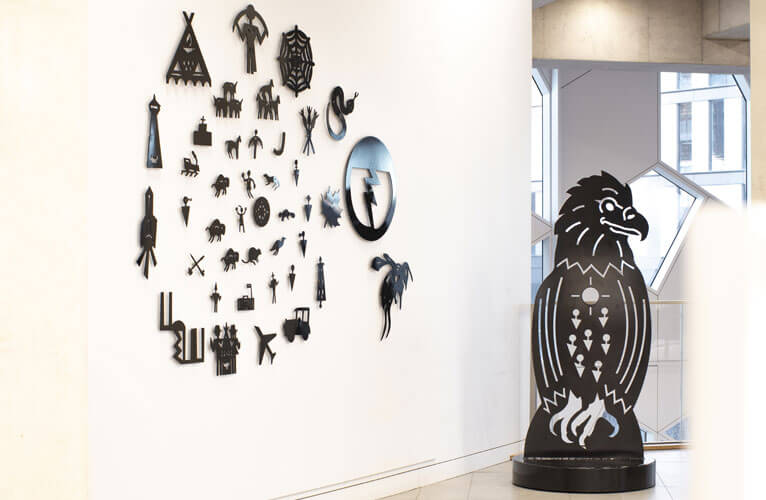 Mnemonic devices and symbolic gestures are key components of the pictographic Blackfoot language, found in historic winter counts, ledger drawings, and petroglyphs. Traditionally, it has often been up to the artist to determine the symbol that represented a single word or idea — and equally up to the reader to decipher their own personal meaning.

Over time depictions of words and ideas have morphed, but there has always been recognition of previous artist’s ideas present — a consistency that binds language, culture and identity together.

In consultation with Blackfoot knowledge keepers, Stimson created a narrative in the traditional written language of his nation that represents and resonates with the territories and nations of Mohkinstsis.

Shared in figures of steel and aluminum, this story transcends two-dimensional space and brings language into the three-dimensional environment, symbolic of the physicality of traditional oral languages.

The interaction between floor and wall elements helps the viewer to visualize a uniquely Indigenous way of thinking about communicating with each other.

Appropriately adorning the well of a skylight, Monroe’s work depicts the cosmology of traditional Blackfoot storytelling. In the background, the mural maps the traditional territory of the Blackfoot people. Significant sites and landmarks are noted in both Blackfoot and English.

In the foreground, constellations, animals, plants, and other beings from Blackfoot stories interact with each other. Human and animal figures appear in equal prominence, demonstrating equality among men and animals within this tradition. Though the figures are represented as traditional petroglyphs, they are cut from sheet metal, symbolic of the endurance of traditional ways. Beadwork and painted accents add colours used in traditional Blackfoot artworks to the piece. 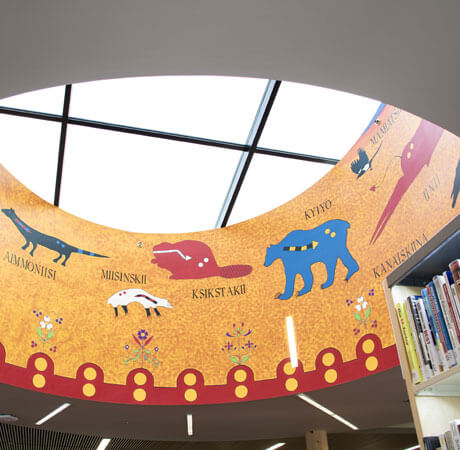 Men’s Traditional Dance originates from the Blackfoot people of southern Alberta. Each dance has its own unique story, as does each outfit worn by its performers. An authentic outfit, even one made in modern times, is always built to last. Thus, each artist who creates a piece like this leaves a beautiful legacy with each outfit they create.

This dance regalia was constructed using traditional methods of making. The two-needle stitching method allows the beads to be pinned down more securely, resulting in beadwork that lays flat and allows for consistency in the geometric design. Taking after traditional regalia, none of the beads in this piece are metallic or plastic — only traditional colours and natural materials are used. These include leather, fur, feathers, bells, hoofs, horns, guard hair, gun shells, and cloth.

Beadwork is an artform that requires plenty of time and patience; it is a meditative practice. During the construction of this outfit, Deerfoot prayed as he worked to ensure beneficial energy was incorporated into every stitch.

On January 23, 1870, in the Piegan Blackfoot territory of Montana, the American army attacked an Indigenous band led by Chief Heavy Runner, to whom the government had previously promised protection. This attack, known as the Baker Massacre, resulted in the deaths of approximately 200 Indigenous peoples, most of who were women, children, and elderly people.

Big Bull’s work recounts this tragedy as this nation itself might have, had they lived to share their story. The winter count is a pictorial history in which important events for a nation are recorded. This history, depicted on elk hide, memorializes the Indigenous peoples who lost their lives in that battle, and considers how the Indian Wars impacted our shared history as a nation. 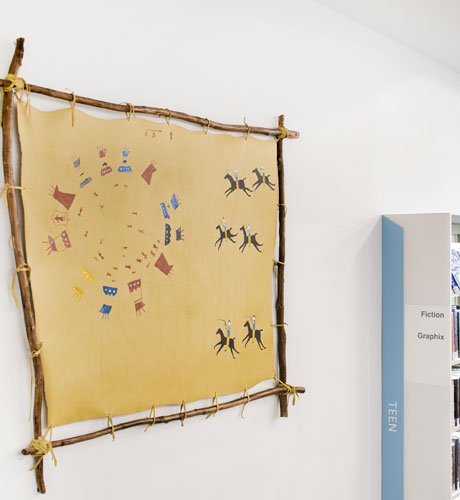