Building and Inspiring Community with Music

Music is a fundamental form of expression that connects cultures and creates bonds. As Hans Christian Andersen said, “Where words fail, music speaks.”

This program is sponsored by Sun Life.

Award-winning musician Daniel Pelton grew up in a musical household and has been playing saxophone since the age of nine. Studying under Dr. Jeremy Brown at the University of Calgary, Daniel became a versatile performer in classical, jazz, and contemporary music styles. Daniel also studied composition under Juno Award-winning composer Allan Gordon Bell.

Daniel recently returned to the University of Calgary to lead a collaborative project between Long Time No Time and the University of Calgary Jazz Orchestra. Daniel’s original compositions and arrangements for big band were recorded live in front of a sold-out audience at the National Music Centre. The final product from that concert, entitled Big Time (Live at the National Music Centre), put Daniel’s work in the spotlight of press outlets including The Calgary Herald and CBC Radio.

Daniel is an experienced educator who has taught privately and at various studios over the past 10 years. Whether one-on-one lessons or larger group settings, Daniel has experience teaching saxophone, flute, clarinet, guitar, musical improvisation, and music composition to all age groups and skill levels.

Daniel prides himself on building musical bridges. Whether those bridges connect genres, institutions, or people, Daniel hopes his music can inspire community, and he is excited to see what bridges can be built during his residency. 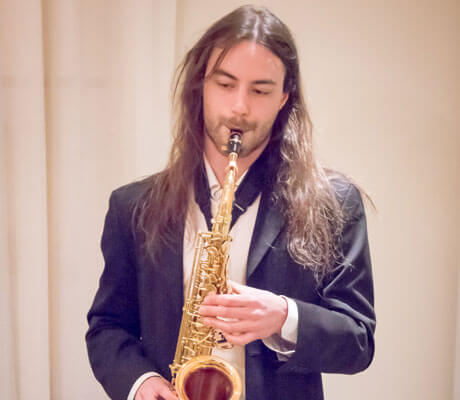