This article originally appeared on bashirmohamed.com. It has been republished on calgarylibrary.ca as a way to share this important historical reference with the public. Please note this article contains explicit, racist terms for historical accuracy.

This is the story of Calgary’s 1940 race riot. A riot that was intended to terrorize Calgary’s black community. The events took place on the evening of April 7, 1940 and involved over 200 white soldiers from the Currie Barracks and the Calgary Highlanders. 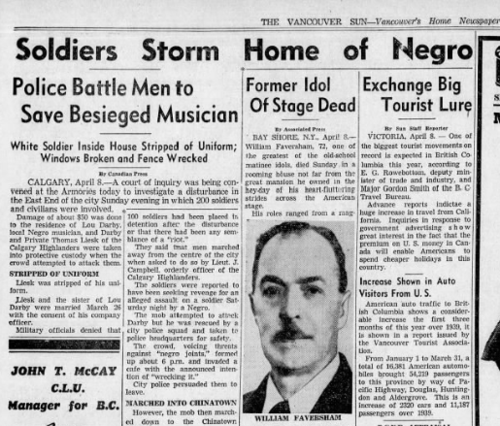 Dance Halls and The Start of the Riot

Lou Darby, a black musician, owned a dance hall often frequented by Calgarians. Below is a photo of Lou Darby and his family in Vulcan, Alberta. Lou is on the far left. 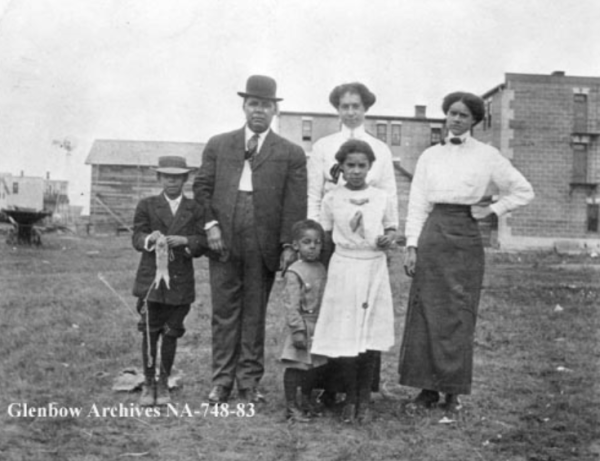 Lou Darby and his Family in Vulcan, Alberta. 1912. Glenbow Archives.

On April 6, 1940, a soldier was at Lou Darby’s dance hall and noticed the woman he was with speaking to a black musician. Local news reports said that, “The girl was reported to have paid too much attention to one of the colored musicians with the result that the soldier became involved in a fight with one of them.” According to local reports, the soldier injured his eye and was enraged at the incident. 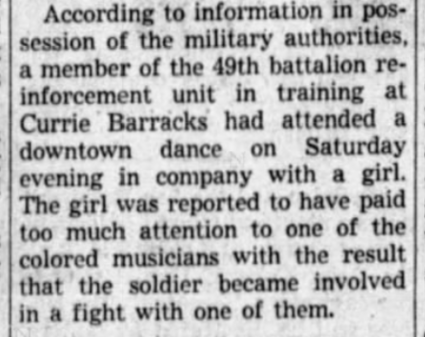 The next day — April 7, 1940 — the soldier entered a downtown restaurant and met others who were dining. The soldier “urged them to go with him to attack the residence of one of the colored musicians.”

The soldiers gathered and marched towards Lou Darby’s home where they threatened “nigger joints.” A number of civilians joined the soldiers. They first entered a cafe at approximately 6 pm with the intention of “wrecking it” but police re-directed the soldiers

The soldiers continued marching when they eventually arrived at Lou Darby’s home. They smashed his fence, broke all the windows, and battered the door. Eventually, the soldiers gained entry into the home where they found Private Thomas Liesk.

Private Liesk had married Lou Darby’s sister and this marriage enraged the white soldiers. They attacked him and stripped him of his uniform. The police would arrive to find Liesk in just his underwear.

The police soon arrived to break up the riot and managed to find Lou Darby who was hiding with a butcher knife. While being escorted out the soldiers shouted “GET HIM” which lead to a short scuffle. In the ensuing battle, soldiers attempted to beat police inspectors with rocks. Darby told police he had the butcher knife ready for him if the soldiers reached him. 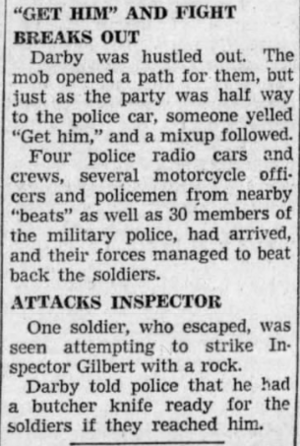 The city police, assisted by the military police, succeeded in dispersing the crowd at Darby’s home. However, the crowd marched towards the city centre where they threatened to “raid nigger joints.”

Lieutenant Campbell of the Calgary Highlanders soon arrived and ordered the soldiers to form in columns of three. He then marched them back to their barracks and dismissed the soldiers. 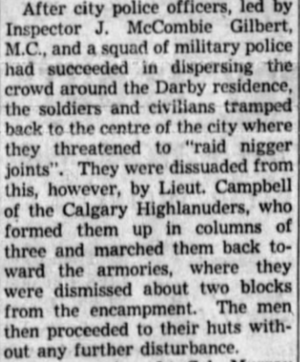 On Monday, April 8, the military announced an inquiry into the incident but they denied that the attack on Darby’s home was a ‘riot.’ 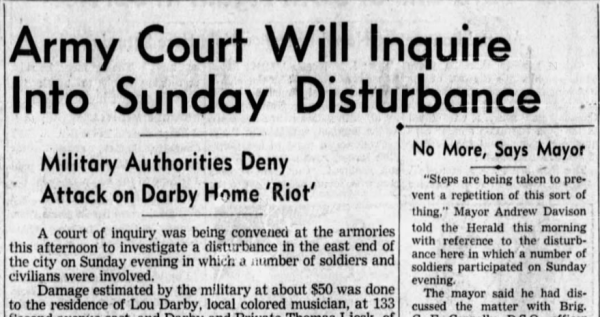 The mayor, Andrew Davison, would comment on the events and promised that, “steps are being taken to prevent a repetition of this sort of thing.”

One member of the 49th Battalion was arrested and held in detention as the inquiry progressed. The outcome of the inquiry is unclear since I’ve been unable to come across actual documents or follow up media coverage.

Despite this, it is clear that a majority of the soldiers escaped punishment after they were dismissed. They were effectively allowed to get away with terrorizing Calgary’s black community.

The details of this riot are relatively unknown and are excluded from our provinces curriculum. As a result, this riot is seen as an isolated footnote in Calgary’s history and the scale of the attack is often white washed by historians — some referring to the incident as ‘isolated.’

I would argue the opposite. This riot was a simple extension of Calgary’s — and Alberta’s — history of systemic anti-black racism. Racism that took the form of segregation, race riots, and blatant exclusion.

This riot is a clear part of Calgary’s history and the terror it left on the Black community deserves to be more well known.

Thank you to all my patreon supports. Specifically, thank you to the ‘Mega Saaxiib” supports: Jackson and Kathleen.