For years, a gold framed photograph lay in a drawer in Central Library’s Local History workroom.

The black and white photograph shows Chief and Artist Sitting Wind holding his painting, looking at his work with a proud yet reflective gaze. In the painting, people converge outside four teepees that stand tall beneath a mountain backdrop.

Aside from the five-line caption, little is known about the piece and how Calgary Public Library came to hold it.

“Bowness Public Library” and “1962” are mentioned in the caption. Bowness was a separate town in 1962, and the town’s library was not yet part of the Calgary Public Library system. 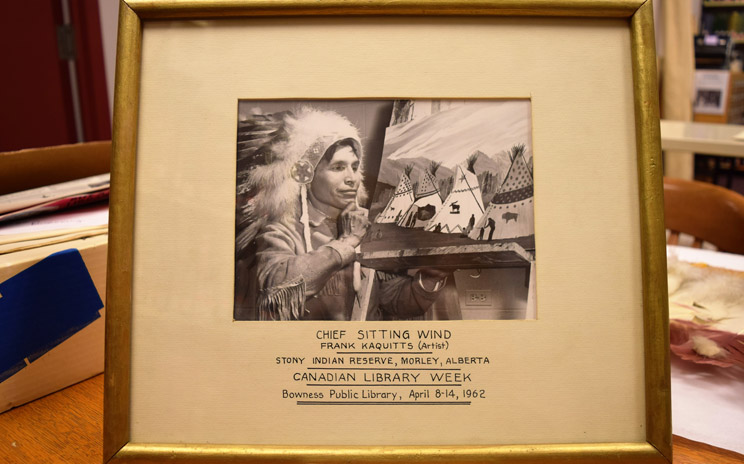 “We’re looking at a handful of items in our collection that haven’t been processed; we don’t have provenance on them,” Ryder says. “We’re asking if we are the most appropriate place for these items.”

Such questions have not always been asked — within libraries and other collections-based institutions.

Inside museums, for example, many Indigenous collections contain artifacts that were gathered or confiscated in the late 1800s and early 1900s.

Later, more efforts were made to deny Indigenous ways of knowing, being, and doing, including residential schools and the Sixties Scoop.

In recent years, as Canadians have started to acknowledge this disastrous colonial past, the return of cultural property to Indigenous nations has become more common. Such repatriation is one step toward reconciliation.

In the case of the Sitting Wind photograph at the Library, the piece’s journey home began in late 2017. Librarian Carolyn Ryder told Teneya Gwin, Indigenous Service Design Lead, about the item.

Gwin reached out to Joanne Schmidt, Acting Curator of Indigenous Studies at the Glenbow Museum. Through a cultural organization, Schmidt connected with a friend of the late Sitting Wind who said she could deliver the photograph back to his family.

“It’s gone home,” Gwin says. “I think this should be a very proud moment for the Library. Not all organizations realize the cultural significance of some of the items they have in their collection.”

Sitting Wind, born Frank Morin on February 28,1925, was given the name Sitting Wind from a Medicine Man when he was a baby.

When Sitting Wind’s mother died when he was four, his grandmother and step-grandfather adopted him (and renamed him Frank Kaquitts). He moved from the central Alberta community of Hobbema (now known as Maskwacis) to Morley, a reserve northwest of Calgary, where he later went to residential school. Born a Cree, he was raised a Stoney.

Sitting Wind was a soldier, a boxer, a landscape artist who attended the Banff School of Fine Arts, and an actor, known for his role in the 1976 film Buffalo Bill and the Indians, or Sitting Bull’s History Lesson starring Paul Newman.

He was also a politician, first elected to serve on the Bearspaw Band Council in 1957, then elected Chief in 1961. When the Stoney Nakoda people voted in favour of merging the Bearspaw, Chiniki, and Wesley First Nations in 1974, Sitting Wind was the first-ever grand Chief of the briefly united Stoney Tribe. Following the return to the three-band system, Sitting Wind served as Chief of the Chiniki Band.

Sitting Wind died in 2002, at age 77. His friend — tasked with returning his photo to his family — remembers him as an informed leader, accomplished artist, and jovial human.

While the Chief Sitting Wind photograph has gone home, the Library’s work in this area is not over. The Library has a headdress in its Local History collection, also with an unknown story.

“The significance of a headdress is enormous,” Gwin says. “For the Library to have one, we need to honour it in an appropriate way or give it back to who it belongs to. We’re working on that.”

For Joanne Schmidt, with the Glenbow Museum, helping people with the repatriation process is a growing part of her job. “More and more, I’m having people contact me and say they want to return something to its rightful place, to the community where it came from,” she says.

Sometimes that homecoming is straightforward, like it was with the Chief Sitting Wind photo. The roots of other belongings can be harder to trace, such as the headdress the Library has. Returning sacred and ceremonial items can come with further challenges.

But cultural property does not help museums, libraries, or individual collectors in the same way it helps the communities where it came from, Schmidt says.

“If you can send it back to the community, they can learn new skills, they get a sense of cultural pride, a reconnection to their ancestors, a way to teach their youth,” she says. “All kinds of things can happen that will never come out of it sitting on a desk or hanging on a wall.”

Read more about Chief Sitting Wind’s life in The Song and the Silence: Sitting Wind, an award-winning biography by Peter Jonker.